When we think about safety gear in biking, the first accessory that comes to mind is the helmet or the kneepads. We often forget the importance of lights and reflectors because not all bikers are interested in biking at night. However, similar to other vehicles, there are laws to follow when it comes to putting reflectors and bike lights in a bicycle.

This situation led me to this question: are reflectors required on bicycles? The answer to this question is a big “Yes.” And this includes not only in America or the United Kingdom but in many other countries as well. The consensus is that all bikes must be equipped with both the reflector and the light in order for the biker to ride them legally. Most new bikes are already equipped with reflectors, and buying additional light is a good option when planning to add additional reflectors.

Basically, bike lighting is classified into two different ways: active and passive lighting. The active lighting is those bike light which needs to be activated one way or the other. Meaning, these are the bike lights that should be turned on to start working and are usually powered by electricity. Most of the active bike lighting is not included in the total overall package of the bike, which means the biker must acquire or purchase it independently.

In America, different states come with various laws governing the bike lights and reflectors. A good example is the state of Washington, where flashing lights are prohibited in every vehicle, including bicycles. As a biker, I suggest that you need to check on the legalities and laws concerning your bike lights and reflectors for you to avoid any issues moving forward.

A Reflector is Not your Ordinary Bike Lighting

Meanwhile, if you try to analyze it, passive lighting can be considered not lighting at all. It sounds confusing, but passive lighting is the reflectors that do not work similarly to regular lighting. But these type of lights is also governed by the law in different states in America. As far as I know, most states require reflectors in bicycles and must be visible from a certain distance.

How Do Reflectors Work?

A reflector is a type of bike light that reflects other lights on the road to make it work. Any lights that fall on the reflector or any light of the vehicle that came across the bike’s path can make the reflector works. The reflector can help give the signal to the other road users of the presence of a biker on the road. Meanwhile, reflectors cannot be used alone because it is too dangerous and insufficient to provide safety to the bike rider.

The problem is when you ride on a dark road without the lights, the reflector will not be able to give you the visibility you need. Reflectors will not also work if it is dirty and old. Because of these instances, I suggest using the reflector as the backup for all your main bike lights. Always remember that this type of light cannot be trusted alone for your visibility. 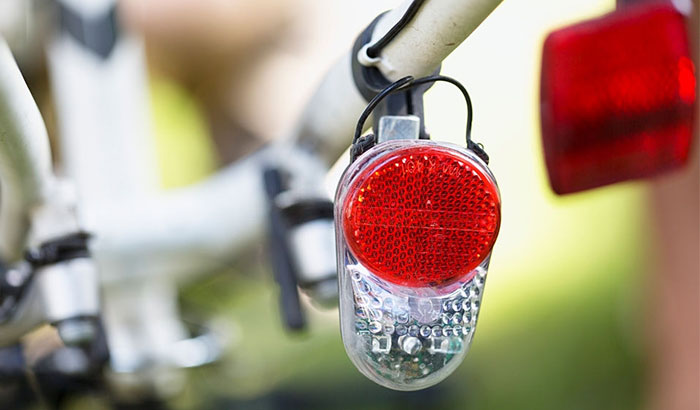 The law also states that the reflector must be mounted at the rear of the bike and the front and rear of the two pedals. However, most of the new bikes now are equipped with different extra reflectors, which should increase the safety of the bike riders. Meanwhile, the reflector requirement in the U.K. when it comes to bike reflector is as follows:

You only need one reflector on the bike rear and must be colored red and positioned in the bike’s middle or the right-hand side. The distance must be between 250mm and 900mm from the ground or near the rear portion of the bike and must be visible coming from behind. There are now bicycles that come with a reflector which means if you do not want a reflector, you can use a bike light when complying with the law.

Riding your bicycle in the dark needs you to install four different reflectors in both of your pedals. One pedal comes with one reflector at the from while the other must be visible at the back. And this covers both of the pedals of your bicycle. Now, there are pedals that do not let you install a reflector, and the best way to negate it is to use reflective arm and ankle bands.

Are reflectors required on bicycles? Yes, it is. Whatever place you are located, the reflector is an essential part of your bike lighting system to make you safe and sound during the ride. However, most of the government worldwide requires bikers to install reflectors into their bike through different laws and policies. As a responsible biker, you must follow the law because it was created to protect and make you safe while biking on the road.