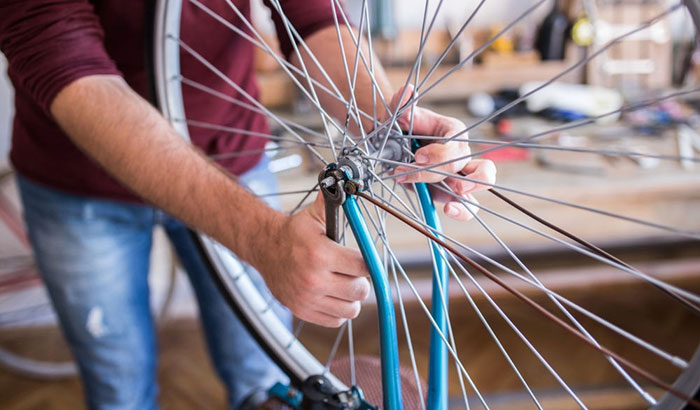 A broken spoke can be a disaster for your bike wheel, which should be replaced to avoid complications. But do you know how to do it? If not, check this article to learn how to replace bike spokes in your bike.

When it comes to removing the broken spoke, you need to be very careful to avoid damaging the whole locking system and making it lose in the rim. What you do is remove the tire while trying to leave the nipple on the rim.

Then, you will need to push the rim on one side, then push the damaged spoke upward to make it come out of the rim. Unscrew the nipple from the broken spoke if you can. If you find the nipple and the spoke connected together, the best way to do it is to also replace the nipple.

The other end of the spoke should be removed as well. You can remove it from the hub islet, which can be done quickly. If you need to remove the cassette of the tire to make it easy for you to remove the remaining spoke, then do it.

If the spokes of your tire are installed three-crossed, make sure that the new spokes are installed similarly with the older spokes. It should be the same in terms of where it crosses with the other spokes inside or outside.

If you have taken the old nipple out, then the next step for you is to put it back in together with the new spoke. Doing this step will be much easier if you have an extra spare of a similar spoke size or a suitable length of your old broken spoke.

What you do is try to fit in the spare spoke to the opposite end of the nipple until it is connected. This space nipple, once connected, will be used to install the nipple back to the wheel. This technique is especially useful on deep-section wheels to avoid losing the nipple inside the rim.

Once the nipple is placed on the rim, unthread the spare spoke while getting the flathead screwdriver to tighten the nipple to the spoke.

When you tighten the spoke, use the spoke key to do it. Tightening the spoke will pull the rim over to the side of the wheel where the spoke originates from. Once you put the wheel back in your bike, you need to check if it is trued or in a truing stand. If it requires some truing, then you have to true your bike to make it work perfectly.

How to Measure Bicycle Spokes 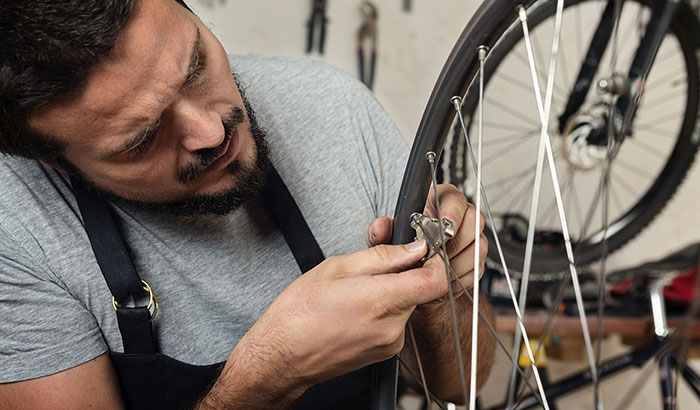 When replacing a damaged bicycle spoke, you will need to have the exact size of the spoke to find a suitable replacement. This situation is the reason why you need to know how to measure bicycle spokes to get the right size.

Spokes come in different lengths and types as it depends on the depth of your rim, size of the wheel, top of the hub, and what type of spoke you use in the first place. You can measure one spoke of your wheel to get the right length.

Start measuring from the inside of the elbow right to the tip of the spoke. You have to measure accurately while adding or subtracting a couple of millimeters to give you some allowance. Otherwise, it will be better for you to bring the whole wheel to the local bike shop for you to find the exact length of the replacement spoke.

How to Tighten Bike Spokes

You will need some tools when it comes to tightening the spoke. A 12-gauge spoke wrench is an excellent tool you can use as recommended by most bikers. It is recommended to tighten both the front and rear spokes to make sure that your bike wheels will maintain a balanced level of tension in the bike components.

It is recommended to start tightening the spoke near the tire valve. The valve will be your guide once you have made your way of tightening all the spokes around the rim. Make sure to turn the wrench as tight as possible in each spoke. A small turn may be enough, but other spokes require extra tightening.

Please remember that spokes that are extra tights come with many benefits compared to spokes that are too loose. As you make your way past the reflector, if there is any on your wheel, simply push it in towards the center of the spoke, allowing space to let your spoke wrench to work.

Once you have passed the reflector, push it back towards the outer rim and get back to its original position. Finish the tightening until you reach the tire valve.

Learning how to replace bike spokes is an essential skill you must learn as a biker. It is part of the maintenance process that can be used if a broken spoke needs to be replaced. You will also need to know how to measure and tighten the spoke because you will also need it in the future.