Since the start of the pandemic, more and more people have been using bikes for different activities. Men and women of all ages use their bikes to and from work. Some bikers are also turning bikes for physical exercise and making their bodies fit.

The first noticeable difference between a bike dedicated to men and women is the bike seat. The saddles of men’s and women’s bikes differ in size and design. The reason behind it is the difference in the physical structure of the man and woman.

Most bikes dedicated to a woman have a wider bike seat so that they can fit the sitting bones and the pelvis comfortably. On the other hand, the men’s bike usually has a narrower but longer seat to satisfy the male anatomy.

To simplify, men and women come with different hip structures and sit bone widths that influence how the bike saddle is designed. The wider design for the women’s bike is due to accommodating the wider hips.

Another difference in the bike seat is the height it is being installed on the bike. For a men’s bike, you will find a relatively high seat post. On the other hand, for the bike made for women, you will find that the seat post’s height is low.

Another key difference between a men’s and women’s bike is its overall frame structure. You will notice the top tube is the most significant difference in the frame and how it connects the handlebar to the bike seat.

But why is the difference? Again, it all boils down to the difference in body structure between men and women. For women, the top tube is usually slanted down to minimize the distance between the bike seat.

Women are shorter compared to women, especially in the torso but with longer legs which is the reason for the design. On the other hand, men’s torsos are longer, which should fit nicely with this parallel structure to the ground.

But apart from this structure difference, there is not much difference between bikes for men and women in the bike frame. You will not notice many differences in the other bike frame parts except for the frame’s top tube. 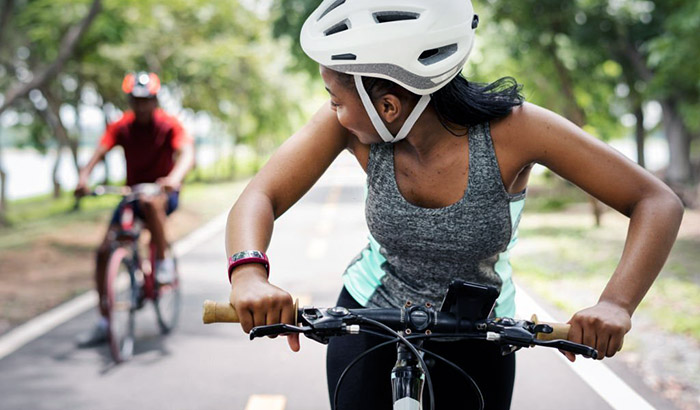 The handlebar of the men’s and women’s bikes also differs in terms of their width. In general, the handlebar of bikes specifically made for men is wider compared to that of the women’s side. To be more specific, the men’s bike handlebar has a measurement of about 42 to 44 centimeters on average.

On the other hand, the handlebar’s width for men is from 38 to 40 centimeters which is narrower compared to the men’s side. But what is the reason behind it? It is similar to the reason with the bike seat and the bike frame structure, which is the difference in physical structure between the two sexes.

The simple reason is still the physical difference between men and women. This time, it is in the size of the hands of both genders. The men’s hands are normally larger than women’s, making the lever larger in the men’s bike.

The primary reason for this difference is similar to the others, which is the physical structure of both genders.

At first glance, it can be difficult to tell the difference when comparing men vs women bikes. However, there are many differences especially in the physical structure of the bike as listed in this article. Overall, every bike is built and assembled to meet the physical requirements of both genders so that every biker will be comfortable on the road.